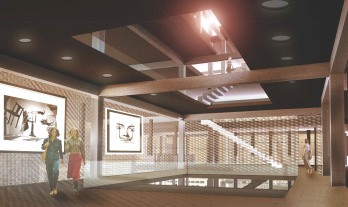 This project uses many of the conceptual tools of cinema to derive into an architectural
space. Using elements of the mise-en-scene such as lighting, perspective, direction, setting, depth, time, foreground, mid-ground and background as an analytical tool to venture into a 3 dimensional space. The analysis begins by studying ‘A Touch of Evil’ directed by Orson Welles; 1958. A plot surrounding the investigation of a murder, the investigation plays back and forth between the US and the Mexican Border.

The director intentionally played with light throughout the entire lm as a tool to further develop the concept of the unknown. The analysis begins by dissecting a series of shots between minutes 13:12 – 14:05 of the lm where there is a confrontation between the female character Susan and an unknown Person that is stocking her with a ashlight from a building across the hotel room she is staying at. The analysis that I targeted throughout the sequence of the scene was primarily based on levels of porosity; porosity in the essence of 3 dimensional space, focus and lighting. These 3 factors greatly play on the unveiling of the scene that can later be used to determine the architecture. The analysis begins by separating the contrast between black and white through focus in each individual scene, it is then re-organized to in terms of percentage where the smaller percentage is automated as the focus of the scene. The scene is also broken apart in terms of foreground, mid-ground and background to further assist in the essence of the focus in the scene. The scene is also dissected in terms of perspective essence mapping the site based on what the camera captures in each scene. The site of the project is located ¼ block due southwest from the corner of Broadway and 2nd Street. The site is inhabited with neighboring buildings on all sides, therefore giving a single façade to entitle itself with. The same way that Touch of Evil played with focus I have broken down the program into a determinant based on population forecast over the course of a year, this forecast translates directly into an algorithm that determines the porosity of each of the program in the space. By pairing up the most porous programmatic areas along with the least porous it accentuates that no part of the building will be left unused at any given point throughout the year. The form of the building was derived using the same technique originally contrived through the analysis of Touch of Evil, recreating a perspective grid in both plan and section on the form contrived sets itself unveiling both the programmatic features as well as physical empathies of the form. The circulation of the building is designed to play between the split courtyard dividing the left and right half by creating two distinctpaths that confront each-other every oor.